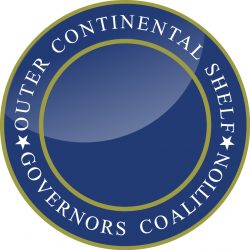 Washington, D.C. – The Outer Continental Shelf (OCS) Governors Coalition today announced Louisiana Governor John Bel Edwards has been selected as its chairman and Mississippi Governor Tate Reeves has been chosen as the Coalition’s vice chairman. Fellow Coalition governors elected Edwards and Reeves as their new leadership during the OCS Governors Coalition Annual Meeting to serve two-year terms for the group.

Edwards will replace Alabama Governor Kay Ivey, outgoing chair of the group and Reeves will replace Alaska Governor Mike Dunleavy as vice chair. The Coalition, formed in 2011, is a bipartisan effort to advance safe offshore energy development through responsible resource management, as part of a comprehensive national energy policy. The Coalition has been a leader on state and federal discussions and coordination for offshore energy issues and environmental protection.

“Governor Edwards’ leadership in Louisiana has prepared him well to assume the role of Chairman of the OCS Governors Coalition, and I look forward to his accomplishments on safe offshore energy issues,” said outgoing chair Governor Kay Ivey. “I am excited about working together with Governors Edwards and Reeves to maintain the organization’s effectiveness and help lead state and federal discussion on safe offshore energy development.”

“I’m honored to become the next chairman of the OCS Governors Coalition. I look forward to building on our momentum as we work together to build a path to economic recovery for our states and nation, while also protecting the environment, our nation’s energy supply and our citizens,” said incoming chair Governor Edwards.

Edwards added, “Thank you to Governors Ivey and Dunleavy on their successful tenures, and I am excited to work with my fellow governors and President Biden’s Administration to share information on an array of energy issues and discuss the best ways to supply the nation with energy to meet our critical needs – from renewables, wave power and carbon capture and sequestration to oil and natural gas.”